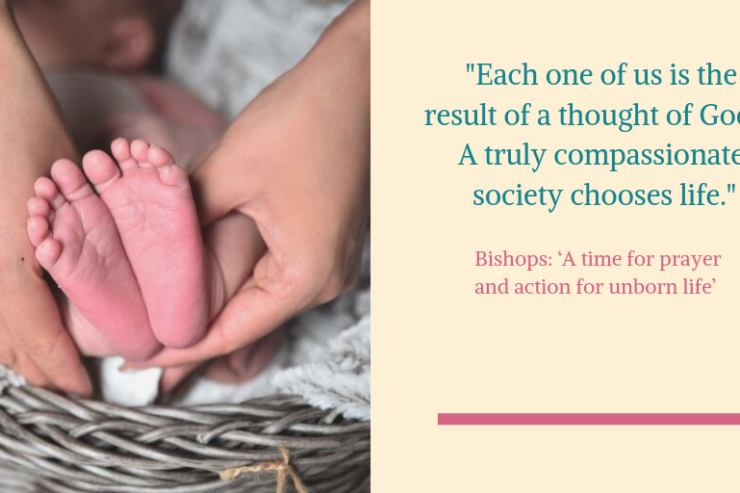 Following the Autumn General Meeting of the Irish Catholic Bishops’ Conference which was held this week in Saint Patrick’s College, Maynooth, the following statement is being published by the Bishops of Ireland ahead of  the annual ‘Day for Life’ which takes place in parishes across the country this Sunday, 6 October:

A time for prayer and action for unborn life

Human laws do not determine what is good or true.  What was true in advance of the legalisation for abortion in the Republic of Ireland, or its proposed imposition in Northern Ireland, remains true today.  Every human life is a gift and a blessing and ought not be destroyed or disposed of at will.  In Ireland, North and South, there are very specific threats to the respect and dignity that is due to every human life.

The Word of God neither ages nor ceases to be relevant, no matter what changes occur in our society and the voice of all who believe the ‘Gospel of Life’ needs to be heard.  In season and out of season the Church proclaims that God is the author of life as we read in Psalm 139, “Before I formed you in the womb I knew you” and as Pope Benedict has said, “Each one of us is the result of a thought of God”.

Bishops echo the recent call of Church leaders in Northern Ireland, inviting the faithful to devote time to private and public prayer for the protection of unborn life over the coming weeks.  Bishops noted that October is dedicated to the Most Holy Rosary and invited people to make their prayer for life through the intercession of Mary, the mother of the Word of God “… who became flesh and dwelt among us … full of grace and truth” (Jn 1:14).

Lamenting the tragic rationale that renders an unborn child a commodity, devoid of any innate value, bishops expressed grave concern at the imposition of dramatic changes to abortion legislation in Northern Ireland, planned by the Westminster Parliament for 21 October, including a period of unregulated access to abortion in the case of unborn children up to 28 weeks of pregnancy.  Alongside prayer, every Christian needs to be aware of what is happening and know how he or she can help promote the culture of life from conception to natural death.

Mindful of the recent appeal of Pope Francis to politicians, bishops called on the Westminster Parliament to recognise and respect the right of the Northern Ireland Assembly and the citizens who voted for it, to have the primary role in legislating in this area.  They also called on Northern Ireland politicians to do all in their power, including restoring the Assembly, to prevent the imposition of this legislation, so that the primary value of every human life would be protected and that a voice be given to those who to date have had no voice in this debate.

Every voter and every political representative should be very clear that abortion is a brutal violation of the precious gift of life.  The freedom of conscience of healthcare professionals needs to be respected and they should not be required to lend their support to an action which conflicts with their commitment to uphold life.  To describe abortion as either healthcare or a human right is to twist language and to misrepresent the true meaning of those terms.  An unborn baby is every bit as human as a growing toddler, a teenager or a grandparent.

This press release was published on Friday 4 October 2019.