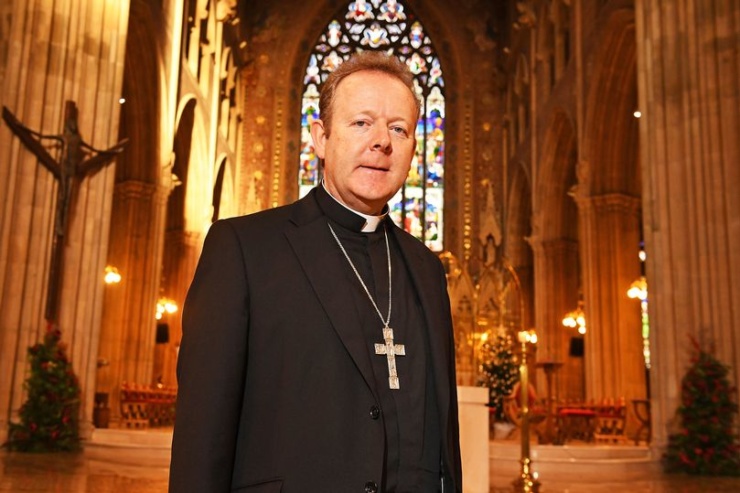 All over the world this week, cathedrals, churches and other public buildings have been lit up in red in solidarity with persecuted Christians, and with other faith minorities who suffer because of their religious beliefs.

Sadly their suffering often goes unnoticed – most of us go on about our business, unaware of the injustice and discrimination which affects our brothers and sisters throughout the world.  By lighting our churches up in red or by wearing something red, we have been reminding ourselves that too many Christians and other religious minorities are victims of insult, violence, torture and even death because of their beliefs.  Today, especially, they are in our thoughts and prayers.

The powerful words of Jesus in this evening’s Gospel Reading could have been written for the persecuted Christians today in China, India, North Korea, Saudi Arabia, Yemen, Eritrea – or in any of the 38 countries identified this year as places where persecution is serious and ongoing:

‘Men will seize you and persecute you; …You will be hated by all men on account of my name, but not a hair of your head will be lost.  Your endurance will win you your lives (Luke 21:12 ff)’.

Article 18 of the United Nations Declaration of Human Rights states: “Everyone has the right to freedom of thought, conscience and religion; this right includes freedom… to manifest his religion or belief in teaching, practice, worship or observance”.  However the Report on “Religious Freedom in the World 2018” published last week by Aid to the Church in Need, shockingly illustrates how countless numbers of people around the world have been killed, “disappeared” or indefinitely imprisoned simply for belonging to the wrong religion.

The Report found significant religious freedom violations in almost one fifth of all countries examined.  Among its most troubling findings for me was the observation that “Aggressive nationalism, hostile to religious minorities, has worsened” together with “increasing evidence of a curtain of indifference behind which vulnerable faith communities suffer” and that “in the eyes of Western governments and the media, religious freedom is slipping down the human rights priority rankings, being eclipsed by issues of gender, sexuality and race”.

This is why it is important for us to gather like this on #RedWednesday to raise awareness of these matters, to express our solidarity in prayer with the persecuted, and to pledge our charity and support for organisations like Aid to the Church in Need who are working to promote religious freedom and highlight abuses.

Of course Ireland has historically been no stranger to persecution and martyrdom for the faith.  This evening in Armagh I bring to mind and prayer the Franciscan friars, Rodger McConvill, Conor McWard and Fergal Ward who were flogged and dragged to death here on the streets of Armagh in the 16th century, Father James O’Fallegan, Parish Priest of Armagh who was tortured to death in the 17th century because he would not recant the faith, and Dean Brian McGurk who in the early 18th century was imprisoned and chained to his death for his faith.  Next year it is my hope to erect a Shrine in the Cathedral to former Archbishop of Armagh, Saint Oliver Plunkett and all those who, like him, were persecuted and martyred for the faith in this diocese.

Jesus said in the Gospel of John: “If the world hates you, remember that it hated me before you… if they persecuted me, they will persecute you too”.  But he also promised in the Beatitudes: “Happy those who are persecuted in the cause of right: theirs is the kingdom of heaven”.

The fact that persecution and martyrdom of our fellow Christians continues today in many parts of the world invites us to consider how we ourselves witness to our faith in Irish society.  We are all called to be prophetic in shining the light and truth of the Gospel into the world, even when it brings ridicule, insult, criticism or leads to our being ostracised in public discourse.

Last week Pope Francis remarked that, in addition to the bloody “red martyrdom” suffered by Christians throughout the world who die for their faith, many others, in democratic countries, experience “white martyrdom” because their freedom of religion is restricted.

We should not be afraid to hold and teach our sincerely held Christian convictions about, for example, the dignity of the person and the sacredness of all human life from the first moment of conception.  In post-referendum Ireland, it remains as important as ever to affirm the sanctity of all human life, and to remind people that the direct and intentional taking of the life of any innocent human being is always gravely wrong.  Sadly we must now do this in a context where we might be shouted down, told to “go away”, or even have our right to freedom of conscience and religion questioned because they do not “fit in” with the prevailing attitudes and opinions around us.

The Book of Wisdom (chapter 3) promises that no torment shall touch the souls of the virtuous… they are in the hands of God, their hope is rich with immortality.  And Saint Paul says “we prove we are the servants of God by great fortitude in times of suffering: in times of hardship and distress; when we are flogged, or sent to prison, or mobbed… we prove we are God’s servants by being armed with the weapons of righteousness… prepared for honour or disgrace, for blame or praise (1 Cor 6:4-10)”.

On this #RedWednesday, I invite you to pray for the gift of courage, the grace of witness and loyalty to Christ for Christians here in Ireland and all over the world, and especially for those who continue to be challenged, attacked, displaced or even murdered for what they believe in.